Read our December issue to find out more on Solebay’s festive offerings (including our Christmas fayre and concert) as well as all upcoming  important dates.

Updates on the School’s Travel Plan

Read Vice Chair of Governors, Jeff Martin’s, letter detailing the ongoing process of the School’s Travel Plan. So far parents and carers have met on three occasions to share views and feedback, since which two risk assessments have been carried out. For further information see the letter in full, attached.

Come to our Christmas Fayre!

Book a time for a parent/carer consultation meeting

Yesterday, I arrived in School to find an invitation on my desk: 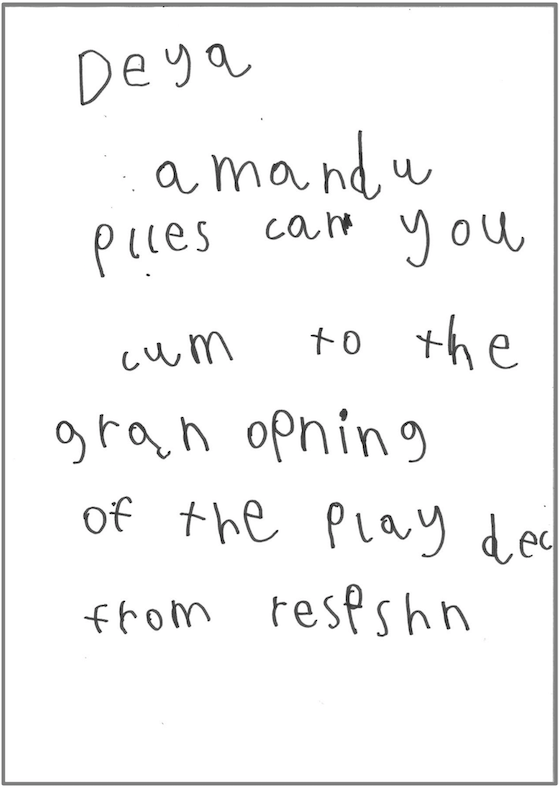 How could I resist? At 2:00pm I went to the play deck entrance to find the terribly excited Reception pupils ready to watch me cut the ribbon. Everyone in the School heard the countdown 10, 9, 8…1 Hurrah! All the pupils had the chance to explore the wooden play blocks, the media centre, construction, hoops and bean bags and a course for twisting and turning.

Janet led an assembly on what bullying really is – how it is persistent and cruel and what we need our pupils to do to keep themselves and each other safe.

Assessments across the School have been completed this week for phonics, high frequency words, reading, writing and mathematics. We are looking forward to seeing how the teaching has ensured that pupils have made demonstrable progress.

Thank you for your generosity in sending in money that will be sent to the BBC appeal. Our superheroes – pupils and staff, thoroughly enjoyed the day.

The Year 3 pupils, 2 parents and our Governors joined all the staff at Solebay at our yearly Conference. This gave everyone an opportunity to find out more about the Trust and our vision. The Solebay group worked together on our School Values and then our staff had further training in EYFS and Mathematics Mastery.

Drop off and collection

Thank you to those of you who gave your views, opinions and comments regarding our arrangements. The Travel Plan group have been meeting a wide range of stakeholders and developing clear risk assessments in order to prepare the Travel Plan by 9th December.

Two out of the three Parent Governors have now had an induction session with the Chair and Vice-Chair of Governors. The next LGB meeting is on 3rd December.

The wet weather hampered our educational visit looking for human and physical features in the Local Area, but we finally got to make our way to Victoria Park. The pupils were very excited about being ‘out and about’.

The Trust decided to pay to prepare the play deck for the Reception pupils, so that we can deliver the expectations of the Early Years Foundation Stage (EYFS) curriculum. There are further discussions still happening with Wilmott Dixon, and within the Board of Directors, to find a lasting solution to the workmanship issues.

Tahreena led the Assembly explaining the importance and relevance of remembering those who give their lives in conflicts.

Janet has spoken in Assembly on how we can keep ourselves safe when in School.

Our marketing and branding partners have taken a whole host of images to reflect what happens in our School so that we can build a useful website that showcases our School community and the education we provide.

The result of the election is that Angela Kunjiraman and Adam Redgrove have been elected Parent Governors. I have congratulated both and the current Governors look forward to welcoming them to the next meeting of Solebay’s Governing Body. I have also thanked Rachel Baliddawa and Michael Paulin for standing for election.

Michael, who received significant parent/carer support, has asked if the Board of Paradigm Trust would consider appointing him as a Governor. The Board can decide, if it so wishes, to co-opt a person to be a Governor where, in its opinion, that person has the skills required to strengthen the Governing Body. The Board is meeting next Tuesday, 18th and I will raise this at that meeting and report to you on the outcome.

I am delighted to inform you that the Paradigm Board of Directors resolved, at its meeting last night, to co-opt Michael Paulin as a Governor of the school.

It was a condition of planning permission being granted, for the change of use of 11, Solebay Street from a warehouse to a two-form entry primary school, that within 3 months of occupation for the permitted use (i.e. by 9th December 2014, when the school opened), we review, complete and submit to the local planning authority the school’s travel plan. As you know, Paradigm Trust only took control of the school on 1st September 2014 but Local Authority officers have told us that it is not possible to extend this deadline.

The travel plan covers a number of initiatives concerned with encouraging safe and healthy means of travel, in particular initiatives to encourage pupils to walk, cycle and use public transport and to reduce the use of cars to travel to and from school. This is necessary to comply with Tower Hamlets’ requirements and government policy.

We have a number of steps to complete before the 9th December filing deadline.

We have met on three occasions a group of parents and carers and have listened to their views and we have received a petition signed by a number of you. We have met Local Authority officers responsible respectively for School Travel Plans and for Transport & Highways (one meeting with the officers was attended by the group of parents and carers) and we have talked to rangers in Mile End Park.

This week, we conducted surveys involving pupils and staff respectively and we have received your written comments regarding any travel or transport issues, for which many thanks. We need to seek views from a number of other people including the Police/Safer Neighbourhoods Officer, the Head of Arts and Parks at Mile End Park and representatives of local businesses and residents’ associations.

As I mentioned, in my letter to you dated 5th November 2014, the safety of our pupils, your children, is paramount. Part of the work we are doing on the travel plan, involves re-examining all of the risks associated with: (1) the current drop-off and collection arrangements and (2) drop-off and collection at the school’s entrances. These risk assessments will include a consideration of the steps that can reasonably be taken to reduce any of the identified risks.

Work on drafting the travel plan is progressing. The plan has to cover a description of the school (including pupil and staff numbers, hours of operation and facilities), its location (roads, nearby residential housing, commercial enterprises etc.), the school catchment area (i.e. the distances our pupils live from the school), the nearest public transport links, the Trust’s ethos, the school’s policies and practice to promote healthy living, personal safety and sustainable transport (i.e. what we can and will do to discourage use of cars for environmental reasons, namely to reduce congestion and save money on parking and petrol), the results of surveys and consultations we have carried out and it will set out detailed, measureable, targets (to reduce use of cars and to promote healthier forms of travel to and from school). We also have to identify who will be responsible for monitoring progress against the targets and reviewing the plan going forward.

We are making good progress but we still have some way to go. Our timetable is:

We will report to you on the outcome in due course.